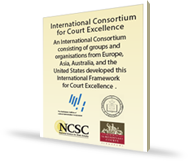 The Consortium is pleased to announce that following public consultation, the new Third Edition of the International Framework for Court Excellence has been completed and has now been released. The main enhancements to the new edition are the inclusion of assessment statements relating to ethics, conduct, technology, risk management, security, data integrity, ADR and problem solving approaches. The self-assessment process and the scoring methodology have been simplified. A special Newsletter (Issue Number 14, available here) has been prepared outlining the background to the new edition and detailing the changes that have been made.

The International Framework for Court Excellence is a quality management system designed to help courts to improve their performance.  It includes universal core values, seven areas of court excellence aligned with those values, as well as concepts, case studies, and tools by which courts worldwide can voluntarily assess and improve the quality of justice and court administration.

The Framework is the product of an international attempt to identify a process for achieving court excellence regardless of the location or size of a court or the resources or technology available to it.  It uses the term “court” to refer broadly to any organization that is part of a country’s judicial system, including courts and tribunals of general, limited and special jurisdiction.

The Court Excellence Self-Assessment Questionnaire is a self-administered instrument that can be used to determine what areas of court excellence must be addressed in the short-term and what areas require intermediate or long-term planning for quality improvement.  It is the first necessary step for a court toward developing a plan to close the gap between “what is” and “what can be” as prescribed by the Framework.

Performance measurement and performance management are integral elements of the Framework. The Global Measures of Court Performance is a primer for policymakers and practitioners and includes eleven focused, clear, and actionable core court performance measures aligned with the values and areas of court excellence of the Framework. It deconstructs the key question “How are we performing?” by addressing two enabling questions:  What should we measure?  How should we measure it?

The Consortium has recently developed a version of the Framework aimed at Judicial Support Organisations, entitled the International Framework for Judicial Support Excellence (‘IFJSE’). Consortium members in the Affiliated Judicial Institutions membership category may wish to consider applying the IFJSE to their own organisations, particularly when courts in the same jurisdiction are utilising the International Framework for Court Excellence. Judicial support organisations are those bodies that provide broad support services to courts as well as specific services such as research, performance management, records management, education, technology, finance, asset or personnel services. These types of organisations play a significant role in supporting the administration of justice and invariably have indirect community accountability as well as direct accountability to their ‘client’ courts, judicial officers and court administrators.

The IFJSE is based on the IFCE and follows the same structure as the ‘Thinking of Implementing the International Framework for Court Excellence’ publication. However, the Self-Assessment Questionnaire in the IFJSE is substantially different and is not designed to be used by courts or tribunals. New IFJSE checklists have been added for specific service delivery functions such as education, research, information technology, finance, asset management, human resources and labour relations. The purpose of the IFJSE, like the IFCE, is to assist organisations identify areas of their operations that may require improvement and to develop improvement plans to guide implementing change. Click here to access the IFJSE.